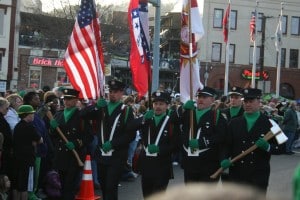 The First Ever 8th Annual World’s Shortest St. Patrick’s Day Parade will be, of course, March 17, 2011, in Hot Springs, AR! The name of the parade is nearly as long as the 98-foot “World’s Shortest Street in Every Day Use”, Bridge Street.

The parade will be led by grand marshal John Corbett, of “Sex and the City” fame, as well as many other TV and movie roles. After the parade, John will also perform a free concert with his band on Bridge Street. Also scheduled to appear in this year’s parade are “Austin Powers”, the world’s Tallest Leprechaun, the International Order of Irish Elvi, and the REAL ELVIS has also announced plans to march. Where else but Hot Springs can you see all that?

This parade has been attracting national attention since 2004, and in 2010 was named “Event of the Year” by ALFiE, and has received numerous other awards. An Irish band named The Corrigan Brothers has even mentioned the parade in their newest release, “St. Patrick’s Day (Everybody’s Irish)” with the lines: “And out in Hot Springs, Arkansas, they always have a ball/ When they host the world’s shortest Patrick’s Day [sic] parade of all.”

Plan on arriving early to secure a good spot to watch the parade. Our Arkansas Bed and Breakfast has one room left for March 17, so call or book online soon – and don’t forget to wear your GREEN!