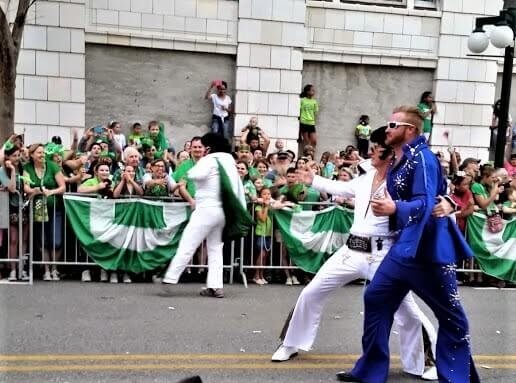 What do Cheech Marin, Danny Trejo, Blues Traveller, and Fredbird all have in common?  They will all be part of the First Ever 17th Annual World’s Shortest St. Patrick’s Day Parade on March 17, 2020, in Hot Springs, Arkansas!  This year’s tiny parade is so big, it’s going to take TWO days to celebrate it!  On Monday, March 16, the O’Kelley’s World’s Largest Inflatable Pop-Up Pub will open at the intersection of Convention Blvd. and Malvern Ave.  They will have live music starting at 5pm, and headliner Blues Traveler will take the stage at 8pm for a free concert on Bridge Street.

After you’ve spent the night in our Hot Springs, AR bed and breakfast, we’ll serve breakfast at Tiffany’s with an Irish flair to start your St. Patrick’s Day right.  Then you might want to sneak back upstairs for a short nap before you head to town for all the fun!

What is Bridge Street?  It’s the World’s Shortest Street in Everyday Use according to Ripley’s Believe It or Not.  It intersects with Central Ave., just a few blocks from Bathhouse Row.  On St. Patrick’s Day, this short little street is packed with a whole lot of fun and quirkiness!  The parade won’t start until 6:30 pm, but we recommend securing your spot on the parade route much earlier!  The Dallas Cowboys Cheerleaders  will kick off the festivities at 5:30 pm, and the official measuring of the parade route happens at 6:25 pm.  Danny Trejo, everyone’s favorite “bad guy”, will be the official parade starter.  Cheech Marin of Cheech & Chong is this year’s Grand Marshal, and returning for it’s second appearance, the Big Idaho Potato will travel down the parade route!  After the parade (which usually lasts about an hour), Foghat will perform a free post parade concert at the end of Bridge Street.

We haven’t even mentioned St. Louis Cardinal’s mascot, Fredbird, or the Irish Elvis impersonators, green Irish wolfhounds, roller derby ladies, quirky floats, a marching band, or the Irish belly dancers!  EVERYBODY is Irish in Hot Springs on St. Patrick’s Day!  Don’t forget to pack something green (the more outrageous, the better you’ll fit in!), and join us in Hot Springs for the short parade with the really long name!!  We highly recommend that you schedule your reservations to arrive on Monday (Sunday is even better!).  You’re not going to want to miss a minute of this fun, and remember that many of our neighboring states are on spring break that week, so plan your Arkansas getaway soon!